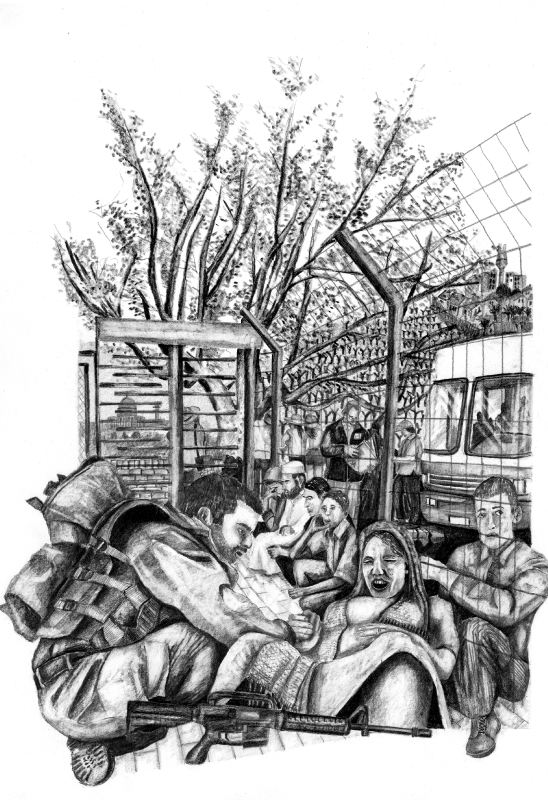 Israeli soldier puts his weapon down to help Um Ali spread her legs, her face is red with shame, her husband is waiting at home in Abu Dis, he doesnt have the right papers with the blue and white stamps, he can’t cross to Jerusalem.

The international community is having 9 course dinners in the Alps

(In the room the women come and go, talking about the status quo).

She said: He doesn’t have the right papers,
So when I drive past the checkpoint into Jerusalem I leave him behind the wall.

I leave him forever each time.

(In the room, the women come and go, talking about the status quo).

A bus of tourists from far far away is at the foot of the sycamore tree in Jericho, they are coming for the tree, they can’t smell occupation.

From the little village behind the wall, Jerusalem is beyond the sun.
(In the room, the women come and go, talking about the status quo)

In the old city, you must have have knaffeh from the place around the corner, and don’t go to,
and buy from,
and eat that,
and bring something back for us, even if it is just a handful of sand.

Im drinking a mint tea as I listen to an American tour guide give a Jewish family an alternative version of history.

(I was asked several times if I was Israeli, they look like us, or, we look like them)

In the evening, the women of Abu Dis gather around plates of rice and meat, they have seen better days and worse. Some of them will never see Jerusalem again.

From my window, I can see the largest settlement, Maali Adumeem,
an island on top of the mountain.

Around it, the olive trees have been decapitated, a landscape of headless bodies stuck in soil.