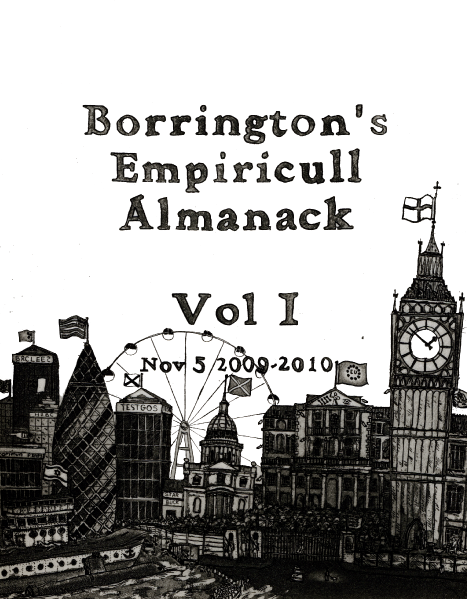 Borrington’s Empiricull Almanack Vol I
He first volume of the Borrington’s Empiricull Almanack, there was some milestones in this year. Firstly Swine Flu to make it a pandemic they had to lower the criteria by quite a long way to convince the idea to the masses.
To the hijacking of the post office it will probably be sold by the end of 2013. Anyway back to milestones x-ray machines in airports full body scanners seeing you completely naked through to the historic court case in England without jury first time in 400 years, the BBC films three leaders of the main parties like a controlled puppet show for the a general election a couple weeks later polling stations run out of ballot papers and close their doors early.
Israeli storm troopers hijacking of a ship heading for Palestine in international water, French President pays Easton eeeeeeee to leave France and finally a strike on the Iranian nuclear power station computer system which have to be done by a enemy state.